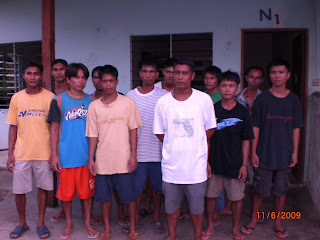 Migrante International, a global alliance of Filipino migrant organizations, calls on the Arroyo administration to send a rescue mission for the 15 OFWs who are being held in a palm oil plantation in Sabah.

"The 15 OFWs are going to starve to death if the government will not act on the situation immediately. The company refuses to let them leave the plantation and have likewise denied them of their food supplies since June 17, last Wednesday," warns Garry Martinez, chairperson of Migrante International.

"The OFWs are being held against their will without any food in retaliation for their refusal to work due to inhuman conditions in the plantation. The OFWs are calling for help and needs government intervention so that they can be repatriated back to the Philippines," Martinez added.

Migrante claims that the Philippine embassy is well aware of the conditions of the OFWs since April 29, 2009 but has not acted on the matter. The Asia-Pacific Mission for Migrants, an NGO base in Hong Kong, has already requested assistance for the workers more than a month ago.

The OFWs are allegedly being paid meagerly from RM100 (Php1,300) to RM500 (6,500) only, depending on their work load or the quantity of produce they were able to harvest. Migrante explains that the said income will then further diminish with the monthly deduction for the levy, working permit and food supplies.

"This is modern day slavery. We call on congress to make an inquiry on this matter. The situation of the 15 OFWs in See Hoy Chan Plantation is not an isolated case. We have recently participated in a Fact Finding Mission in Sabah and we were appalled by the conditions of our kababayans in the said region," exclaimed Martinez.

Martinez reveals that Migrante together with other NGOs went to Sabah, Malaysia from June 11-17 for a Fact Finding mission that aims to document the situation of migrant workers in Sabah.

"The Arroyo administration along with its embassy officials is going to be accountable if they fail to rescue the 15 OFWs. We urge them to visit the said OFWs immediately and insure their safety along with their demands for a just compensation," Martinez concluded.###

Email ThisBlogThis!Share to TwitterShare to FacebookShare to Pinterest
Posted by Unknown at 4:19 PM