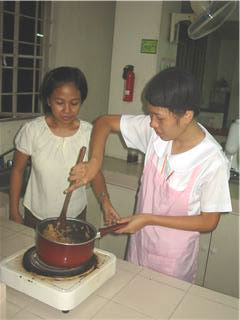 Skills such as cooking and using the computer are taught in the Palihan (workshop) program of the Erda Tech Foundation, which allows out-of-school children who have parents working overseas a means to express their creativity.
OFWJC / Ruby Anne R. Pascua
MANILA – IN THIS school, students are allowed to stare across the window to daydream during classes.
That’s how some students like Cathyrine Tamayo and Ginesa Patalinhog get their motivation to stay out of the streets and stay in this school called Erda Tech.
For Tamayo and Patalinhog, both 17 years old, their dreams bring them to the places where their fathers are: thousands of miles overseas.
But instead of feeling sorry because of the separation and over the poverty that pushed their fathers to leave for work abroad, the two are allowed to express their dreams through creative means.
Tamayo loves to paint, using watercolor as medium. Patalinhog does, too. She is also a member of the school’s dance club while both are part of a group of young artists.
Erda administrator Wilhelmina Martinez said the school’s program called Palihan (workshop, in English) has been effective through such method of tapping into the students’ creativity because “we are also cultivating in them their personality and work attitude.”
“We found out that if we give adequate skills preparation to these children, mold them to have the right work attitude and have them all geared up to work hand-in-hand with other people, they will really be ready for employment,” Martinez added.
In a country where the number of high school dropouts and out-of-school youth are increasing in numbers, Erda Tech offers a fresh take in training young people like Tamayo and Patalinhog to traverse the social costs of the country’s overseas labor export program.
A study by F. K. Coronel and F. Unterreiner for the United Nations Children Fund cited that because “migration involves the separation of one or both parents from their children …therefore [it] goes against the best interest of the children.”
The paper titled “Towards a greater impact of remittances on children’s rights realization,” estimates that there are “about 3.75 million (Filipino) children left behind by their fathers.”
“These yield a total of 5.25 million children left behind by migrant mothers and fathers,” the paper, released last May, said.

I would like to share with your readers my experience here at the Maltese Consulate to the Philippines.

Having come here from the Philippines as a business woman with capital and projects to manufacture handicrafts in Malta, I went to the consulate in the hope that they would help me in my endeavors. Very soon I noticed and learned that they were charging Filipinos a fee for a single signature, endorsement, or visa extension. Now I have absolute proof that the consulate's intervention was not needed for the issue or extension of a visa to stay in Malta since this was at the discretion of the immigration department in Malta following a request by the Philippine Consulate in Manila.

Besides this, one of my clients, a Maltese, wanted to visit my factory in the Philippines and after he enquired at the consulate, he was told that a visa was required and charged him over 30 liri for it, when in fact none was needed. When I brought this up with the consulate here, they just laughed.

It seems that the consulate wants to control anything which Filipinos residing in Malta are doing so that they can charge fees for their imposed intervention.

Because I spoke up and made it amply clear that I did not think it was fair for my compatriots to be treated in this manner, I was shouted at, verbally thrown out of the office and told in very crude language that he could do what he liked and that no one could touch him. I filmed the whole meeting on my DigiCam.

A few inquiries over the Internet, however, revealed that the Consul to the Philippines in Malta's term had expired on the 3rd of February 2007.

On the local newspaper, there was a call for all Filipinos in Malta to attend the Celebration of the Anniversary of Independence Day in the Philippines which was held last Sunday in Valletta.

I printed all the relative documentation which proved that the consulate was an “EX” and went to the venue in the hope of informing all the bona fide Filipinos there that they were no longer obliged to contribute to the Consul's coffers given that he was no longer their representative. Moreover, I insisted that he had no right to rally Filipinos to celebrate their Independence Day in Malta when in fact he was not any more connected to the consulate. I also objected to his flying my country's flag outside his office.

Once again, I was told to please leave, that my presence there was not welcome.

I would like all the press here to get their nose onto this in the hope that if any injustices have been suffered by Filpinos in Malta, some form of compensation or remedial action will be forthcoming.

Email ThisBlogThis!Share to TwitterShare to FacebookShare to Pinterest
Links to this post Posted by Unknown at 10:51 PM 2 comments