This is an urgent breaking news from Brisbane Australia.

I was shocked to learn that an OFW died of stroke and has been at the hospital morgue for three weeks.

I spoke to one of the officials of the barrio fiesta affair but I wasn't given any information about the OFW, but I managed to speak to one of the OFW who has worked with him.

The dead OFW's name is ROLANDO CORTEZ from BATANGGAS CITY.

He came to Australia under Visa 457- as welder with 3 yrs contract and was initially hired byTRANSAFE in oct 2005. He did not finished his contract with this employer.

He was hired by another company, as in-house welder, in April 2007. I'm sorry, I didn't find out the name of the new employer.

He has stroke one Tuesday, four weeks ago and was admitted to Prince Alenxandra Hospital, Brisbane. It was announced that, his body maybe transported back to Philippines sometime nextweek, no sure date yet.
Donations were being colected here for his body to be sent to phils.

A world without Filipino 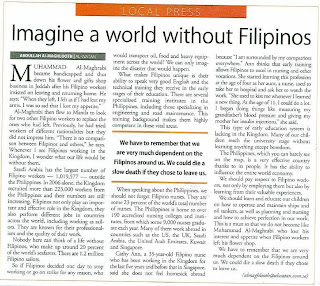 This article has been out for quite a while. But I'd post it anyway for those who have not seen it.
Email ThisBlogThis!Share to TwitterShare to FacebookShare to Pinterest
Links to this post Posted by Unknown at 11:52 AM 0 comments

A forwarded letter to the editor

It is a clear example of opportunism and intimidation by the to send in the aircraft carrier, the USS Ronald Reagan, and its warships in Philippine waters. Fearing the effects of typhoon Frank/Fangsheng in its dock in Hong Kong, the has used the pretexts of helping typhoon-affected areas and relief efforts ongoing in the region to enter Philippine territorial waters.

Not only is an aircraft carrier group in our territory overkill, it is also a mockery of the anti-nuclear weapons provisions of the Constitution, the presence of which the neither confirms nor denies in its war ship. Furthermore, it is a subtle form of intimidation to President Arroyo while she visits the US: to not to ask too much and continue to tow the Bush administration's line or else face the reality that an aircraft carrier group main purpose is to wage war and not effect humanitarian aid.

An aircraft carrier group is a mobile military base that can project military might over a big area in the ocean. Its presence in our country reflect the need for the to project visible and psychological presence and underline their "commitment" to a country or region. Military presence is a reminder that one does not need formal political control over its territorial sovereignty to exercise political and economic control over a country.

It can be likened to a loaded gun pointed at the government and to us as a people. Its message: take our "aid" whether you want it or need it. Their mere presence intimidates and gives coercive power for the US to gain concessions from the host country and allows it to interfere, in most cases with impunity, in internal affairs

That the US calls the Philippines its "second front in the war against terror" and that it has periodic and overlapping joint exercises with it is not an accident, it does this to strengthen its position in this country for the purpose of being in the position to grab and control the resources of Southeast Asia .

We do need international aid at this time but we do not need the opportunistic military projection by the forces of the . If the government and other countries are indeed serious in helping out, they could help our civilian disaster efforts by providing material and technical assistance.

We close our doors on a gun-toting thug who wants to enter our homes, even if he is saying that he wants to help you. In this case, it is in these times of national tragedy that we should exercise national sovreignty in asking for international help. We should not allow the emergency to be used as a pretext for other countries to push their own agenda.

Email ThisBlogThis!Share to TwitterShare to FacebookShare to Pinterest
Links to this post Posted by Unknown at 12:10 PM 0 comments 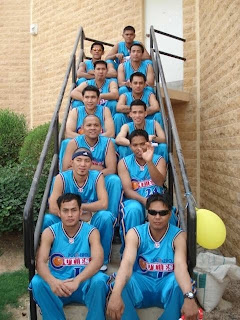 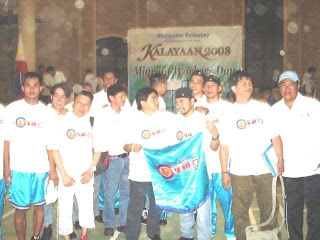 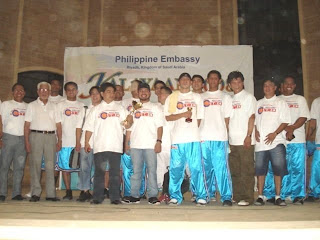 Riyadh--It is not the Staples Center in Los Angeles nor the Boston’s TD Banknorth Garden.
The Eastern Province quintet of the Philippine Overseas Labor Office Cuties which was backed by the United Filipino Basketball Federation’s new breed of basketball stars romped over the much hyped Riyadh selection 85-80 during the celebration of the 13th Filipino Migrant Workers Day at the Philippine Embassy, Diplomatic Quarter in Riyadh on June 06, 2008.
The Filipino community in the Eastern Province was represented by a bunch of basketeers; albeit underrated but oozing with talents, big hearts and a will to win. They call themselves POLO-ERO Cuties - prototypes of their energetic and endearing Labor Attache, the Honorable David Des Dicang; who heads the delegation with the full support of UFBF’s Adviser, Mr. Jun Ayag.
The scores were clearly in favor of the visiting Cuties quintet as they were ahead by 8 points in the first half with Riyadh rallying to get 15 points after the first quarter. The furious comeback of the host team came in the third canto when it tied for 62 all. At the onset of the final quarter; it was a nip and tuck affair. Neither team allowed themselves to lodge in the basket. With 71-70 score in less than 3 minutes remaining, Riyadh five was a point ahead until Cuties’ triggerman Rolly Bisda fired a long 3-point shot with a foul to boot from Angeles. From then on, the Cuties safely protected and never looked back that ultimately bagged the coveted championship trophy.
“It was a sweet victory” enthused by their head coach, Leo Gines who was slapped with an uncalled technical foul few minutes after the 1st quarter had started. “The match unraveled the emergence of future superstars in the mold of basketball legends” he continued. Superb playmaking was seen in the personas of Neil Aclan and Coco Gonzalez. Towering 23 year-old center, Jengkins Bucao was a monster rebounder battling himself with the likes of Riyadh’s veteran players Yasay and Santander. Jun Derama was a power forward, a reminiscent of the fabled Crispa’s Villamin and Toyota’s Abe King. Sweet shooters Michael Bombita and Zaldy Patanao were unstoppable. The whole bench had contributed immensely to the game as showcased by the remainder of the quintet; Jerry Mallilin, Al Pineda, Jeffrey Bajar, Angel Singian and Glen Abrantes. The hard nosed defense employed by the Cuties at the remaining minutes of the game certainly preserved the win. The 6’4” Bucao was specifically instructed to overplay Santander, the inbounder on the ensuing play which made life more difficult for their offense. Gonzales was later adjudged as the Best Player of the game.
The big win would not have been historic without Cuties’ full backing from its organizers, team managers, coaching staff and EP supporters headed by Rodee Cariaso, Rene Manlulu, Francis Gascon, Aries Directo, Dexter Ramirez and Arman del Mundo. These are the same wonderful people running the UFBF, the name to reckon with in the basketball league in this part of Saudi Arabia. The team’s muses were the beauteous Ms. Apple King and Ms. Monica Sitchon who were escorted by their wonderful parents (Mr. and Mrs. Jimmy King - 2005 Bagong Bayani Awardeee and restaurateur couple Mr. and Mrs. Ronald Sitchon) all the way to Riyadh.
Yes, the dream match was not held at the Staples Center in Los Angeles nor at the Boston’s TD Banknorth Garden--the sites of the ongoing NBA Finals--the thrilling, down the wire sporting event was played with a bang at the Philippine Embassy grounds in Riyadh that will remain as a benchmark for sports organizers in future regional sporting events.


Labels: Filipino Migrants, Saudi Arabia, Sports
Email ThisBlogThis!Share to TwitterShare to FacebookShare to Pinterest
Links to this post Posted by Unknown at 10:59 AM 1 comments

A year of inactivity

I know, I know. This blog has been inactive for a while (actually, its been a year) . Well, I've been busy, but I will make it up for you. I will post some of the best stories that we had during the past year and some of the mails that we receive on a regular basis.

I will also try to make this site a little more different than ours, www.ofwjournalism.net, which all of you out there can check

V
Email ThisBlogThis!Share to TwitterShare to FacebookShare to Pinterest
Links to this post Posted by Unknown at 12:46 PM 0 comments