Fwd: Chiz urges government to aim for no public school dropouts by 2016 (with photos) 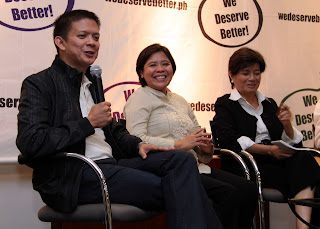 "We should be able to graduate more students in both levels, if not achieve universal primary education by 2015, as targeted in the UN Millennium Development Goals," he said after speaking at a forum on education at the AIM Center in Makati. The forum was organized by the Movement for Good Governance, Youth Vote Philippines, Philippine Business for Education.

Escudero said a UN report in 2000 shows that in nearly five decades since the 1960s, dropout rates at the public elementary level have remained high, with 28 to 34 percent failing to complete Grade 6.

He said the latest data estimates that of the 100 children who enter Grade 1, only 86 move on to Grade 2, 76 to Grade 4, 67 to Grade 6, and only 65 finally complete the six years of elementary education.

Of the 65, only 58 enroll in high school and 45 are able to graduate, Escudero said.

He said while the Department of Education has the biggest share of the national budget at P158.2 billion, it still does not meet the standard set by the UNESCO, which is six percent of a country's Gross Domestic Product (GDP).

"Education is the greatest equalizer. Most of the children who are left behind live in poverty and in remote areas. The next administration must aggressively move to narrow the education gap and increase education's share of the national budget to 20 percent," said Escudero.

He said that more classrooms should be built to meet the 1:25-30 classroom-student ratio recommended by the UNESCO.

Escudero said the DepEd has only allocated P3.5 billion for building school buildings this school year.

He added that the lack of classrooms is particularly glaring in the Autonomous Region in Muslim Mindanao where the student-classroom ratio is 1:45.

"With enrolment reaching 21 million, the government has again resorted to double, even triple, shifting to accommodate students in our public schools," he said.

"We must invest in our youth and we must spend for it. All slogans and campaigns touting progress will be for naught if many of them are left by the wayside," Escudero said.

Email ThisBlogThis!Share to TwitterShare to FacebookShare to Pinterest
Posted by Unknown at 2:38 PM