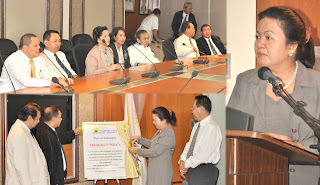 The Philippine Ports Authority (PPA) is working on an ISO certification, a move to standardize some of the operational functions in some of its major ports nationwide.

PPA General Manager Atty. Oscar M. Sevilla said that the PPA has selected the "vessel entrance and clearance process at the Port of Batangas" to be certified first after which the process is hoped to be replicated in other major ports.

The state owned corporation recently conducted the symbolic launching of the PPA ISO Quality Management System (QMS) on vessel entrance and clearance at the Port of Batangas.  Said ISO QMS certification is being pursued by PPA in line with the objective of the Department of Transportation and Communication (DOTC) Project on the Development of QMS for DOTC cluster Agencies and in compliance with the requirements of Executive Order 605 which directs all departments and agencies of the Executive Branch to establish and adopt the ISO-certified QMS.

During its symbolic launching, PPA AGM Atty. Gloria Bañas said that the launching of the PPA ISO QMS is a fitting realization of the Port Agency's vision to make the major ports of the country catapult into the international ocean of world class port.  "Expectedly, this event now marks PPA's initial journey towards ISO certification," AGM Bañas added.

Lilian Javier, PPA port operations services department manager said that the DOTC Project on QMS also aims to provide the required training to enable agencies to gain expertise on the ISO-QMS Standards.  Cascading of the trainings and replication of the initial ISO-QMS process  to other ports nationwide and/or expansion to other processes are left to the Port Agency to work on.

The PPA targets to start the implementation at the Port of Batangas this mid August and to start working on its replication in Davao and General Santos before the year ends.  "We plan to continue the same for the ports of Cagayan de Oro, Zamboanga and Iloilo by next year," Ms. Javier added.

Email ThisBlogThis!Share to TwitterShare to FacebookShare to Pinterest
Posted by Unknown at 2:37 PM