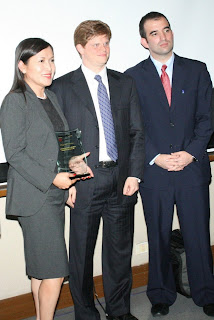 ICTSI was ranked 39th in Southeast Asia and third in the Philippines in the list's RWA-Overall Business Cycle.  Eleven Philippine companies made it to the regional rankings, with ICTSI cited as one of only two companies in the country that created wealth for shareholders during a six-year business cycle from 2001 to 2008.

The RWA Index is based on a metric system devised by Stern Stewart that measures companies' wealth made during expansion and contraction periods.  Listed companies are pitted against peers classified according to industries defined by business news and information provider Bloomberg.

ICTSI, classified under transportation, also placed in the RWA-Overall Expansion list at rank 26.   The Company was not included in the RWA-Overall Contraction list, an indication that ICTSI weathered the global economic crisis based on its performance from 9 October 2007 to yearend 2008.  Stern Stewart identified the 9 October 2007 as the peak of the market based on Bloomberg data.

Rankings in another list, the Wealth Added Index (WAI), were also released.  ICTSI placed 74th in the WAI-Overall Business Cycle, and 31st in the WAI-Overall Contraction list.  WAI, another metrics developed by Stern Stewart, measures excess wealth generated above expectations based on perceived risks of shares, especially if companies exceeded its cost of equity.

The placement of ICTSI in the WAI-Overall Contraction list is another positive indicator based on the WAI principle of outperforming cost of equity during expansion and underperformance during contraction.  Over the business cycle, companies should cover their cost of equity during high, low, and neutral periods.

Both RWA and WAI follow the Economic Value Added (EVA) philosophy developed and popularized by Stern Stewart.  EVA is based on the principle that firms, business units, projects and activities must beat their cost capital.

ICTSI is a leading port management company involved in the operations and development of 19 marine terminals and port projects in 13 countries worldwide.   For over 20 years, ICTSI has proven itself to be the private sector partner of choice for world-class trade facilitation in the economies it serves.
Email ThisBlogThis!Share to TwitterShare to FacebookShare to Pinterest
Posted by Unknown at 12:33 PM