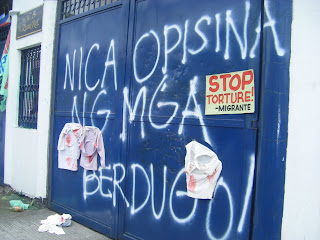 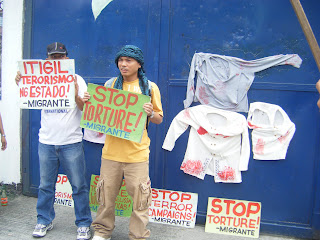 The biggest global alliance of OFW organizations held a lightning rally today in front of the National Intelligence Coordinating Agency (NICA) building to condemn what it calls a prelude to a series of abductions of officers of progressive organizations such as Migrante.

"We strongly believe that with the inclusion of Migrante in the AFP Order of Battle and the abduction of Melissa Roxas, who was thought to be Maita Santiago, is a part of a new wave of attacks on progressive organizations, journalists and other oppositionists. If not for their blunder, the series of atrocities could have victimized more leaders of militant organizations. This only proves that the AFP order of battle prepared by the 10th Infantry Division of the Philippine Army (IDPA) based in Southern Mindanao is being implemented to the letter by its death squads," Martinez explained.

To dramatize their protest, the group glued several clothes covered with blood at the gate of the NICA building to represent the hundreds of victims of torture, forced disappearances and extra-judicial killings under the Arroyo administration.

"NICA should be spelled with a small 'I' for they have an intelligence of a moron. They could not even get their target right! Their stupidity to include a legitimate journalist in their order of battle likewise reflects what kind of intelligence the AFP has," Garry Martinez, Chairperson of Migrante International, exclaimed.

Prior to Melissa Roxas abduction, a soldier handed a document to a group that was conducting a probe on the human rights situation in Mindanao. The said document contained an order of battle (OB) naming persons and civil society organizations as either "dominated, targeted or organized" purportedly by the Communists. One of the names listed in the said OB is Carlos Conde, a journalist of 15 years who is presently working as a freelance correspondent for US-based publications, namely The New York Times, the International Herald Tribune and GlobalPost.com.

"We also strongly suggest to both panels of the Government of the Republic of the Philippines (GRP) and the National Democratic Front of the Philippines (NDFP) that the issue of abduction and torture be placed as the first agenda in the impending Peace Talks," Martinez said.

Government and the NDF panels recently agreed to sit down again after the talk was stalled 5 years ago. The resumption of the Peace Talk is scheduled to be held late this month in Norway.

"We would also like to warn the people to be more vigilant. We believe that human rights atrocities will intensify as the elections come closer. We fear that the abductors and torturers of Melissa will specifically target progressive party-lists who will run in the 2010 elections and the only way to stop these is to put President Arroyo and its AFP death squad behind bars," added Martinez.

The group vowed to expose Arroyo administration's human rights violations since 2001 through its member organizations in 23 countries across the globe. They are also considering to file a formal complaint to the office of Prof. Philip Aliston, UN Special Rapporteur on Human Rights who blames the AFP and the Arroyo administration as the ones responsible for the extra-judicial killings and forced disappearances in the past.

"President Arroyo's days are numbered. If she thinks that she will leave Malacanan Palace clean and spend her days dining in Le Cirque, she is dead wrong.. Migrante along with our members worldwide will see to it that justice will prevail and Citizen Gloria Arroyo will pay for its crimes against the Filipino people after her term," Martinez concluded.###
Email ThisBlogThis!Share to TwitterShare to FacebookShare to Pinterest
Posted by Unknown at 3:21 PM