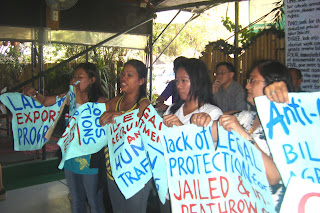 More than half a million migrant Filipinos have registered as voters.  Days after the polls opened in various countries abroad since April 10, the turnout has been low.

But make no mistake about it.  The Migrant Vote has become even more significant in the fact that it further draws attention to the plight of OFWs. As numerous as they are, so have their problems become.  Even exercising their right to vote is exceedingly difficult in countries where they work, without discounting fraud either through automation, manual or postal voting.

The electoral campaign has not been helpful either.  All the shallowness and mudslinging by candidates only served to cast away attention from the real issues that migrants face.

In this light, Migrante International is asking candidates and prospective winners to view the Migrant Vote not just as an added statistic or piece of electoral returns but as a compelling message to address their plight.

This plight is spelled out in Migrante's Seven Point Covenant, which also serves as a benchmark for a strong migrants' agenda that candidates and prospective winners may carry in their platform of government.

Migrante  appreciates the importance they bring to this sector.  The said candidates recognize how important this sector is to the Philippine economy.  Undeniably, the OFWs through their remittances are saving this nation from total ruin.  In 2009 an unprecedented $17.3 billion was remitted to this country despite our OFWs reeling from the economic and financial crisis abroad.

Migrante hopes that the signing of the Covenant will foster understanding, cooperation and partnership with said candidates long after the elections are through.    ###

The Migrant Vote: Drawing Attention to the Plight of OFWs

As Filipino migrants continue to cast their ballot in various parts of the world, Migrante International draws attention to the Migrant Vote as a compelling message to candidates to address the plight of OFWs.

This plight is spelled out in Migrante's Seven Point Covenant with national candidates signed today, April 15, at Greenhouse Grill,  Matalino St., Quezon City.  Attending the signing are senatoriables  Liza Maza, Tito Soto, Jun Lozada,  and representatives of Gilbert Remulla and Luigi Gana, husband of Gwen Pimentel. The candidates have pledged that they intend to promote the rights and welfare of OFWs.

Rep. Maza, while in Congress as Gabriela Women's Party representative, has authored the Anti-Trafficking Bill while Congressman Jun Lozada, Sen. Tito Soto and Senator Pimentel were co-authors of the Overseas Absentee Voting. Atty. Gwen Pimentel has also herself facilitated many cases of repatriation of OFWs.

"There must be a public and high profile discussion on real issues such as that of OFWs," said Migrante chair Garry Martinez.  "We believe that through this covenant with the candidates, OFWs can raise the challenge further for government to do more for OFWs."

Cases of neglect, abuse and exploitation daily plague the offices of Migrante chapters abroad, and attention from government has been minimal compared to the OFWs' sheer numbers.

"The neglect is unconscionable," said Martinez, considering that the OFWs have been keeping the economy afloat and have sent an unprecedented $17.3 billion in 2009.

The Migrante officer continued, "Thus, we believe that there is a growing significance to the Migrant Vote. The Overseas Absentee Voting (OAV) should not be treated as just another voting exercise and its results just a sheet of electoral returns.  It should serve as a reminder to candidates or winners in the elections for them to carry a strong migrants agenda."

Migrante has vowed to use its Covenant as a benchmark for this agenda.  On top of this is holding the Arroyo government responsible and accountable for its corruption and plunder, including the raiding, misuse, diversion, or anomalous investments of OWWA funds.

"We are particularly calling to those who sign this covenant to closely look into the scrapping of the oppressive OWWA Omnibus Policies as this could mean immediate and meaningful provision of much needed services for OFWs in distress," declared Martinez.

Also cited in the Covenant are the need for legal and welfare protection for OFWs, the repatriation of innumerable runaways and stranded OFWs, stronger enforcement of laws against illegal recruiters, prevention of trafficking and sexual abuse, and a stop to onerous exactions, forced contribution and fees.

More importantly,  Migrante is moving towards the scrapping of government's labor export program through massive creation of local jobs or employment, and ultimately to reunite families and to chart a better future for their children.    ###

Email ThisBlogThis!Share to TwitterShare to FacebookShare to Pinterest
Posted by Unknown at 6:03 PM