1 year after, remains of OFW in Taiwan not yet repatriated 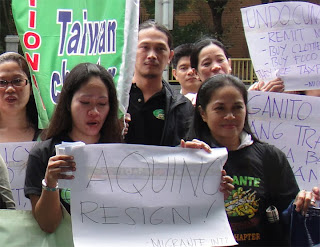 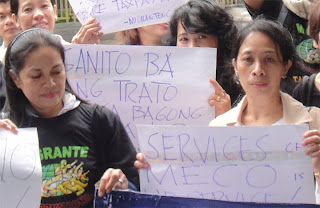 Statement on the commemoration of Marilou Sables Death - MIGRANTE Taiwan

Today we commemorate the 1 year and 8days to be exact when Marilou Sables died of cardiac arrest here in Taiwan Last April 17, 2009. Our  issue in Atty. Carlo Aquino or MECO's neglect and indifference in the repatriation of the body of Marilou Sables. Eventually she was buried here in Taipei on March 26, 2010 because of a technicality which MECO eventually was not able to solve and lack of attention given to her case. in more than  a year's time Meco is definitely inutile and only good in LIP SERVICE.

Now, Migrante International, Migrante Ilonggo, Gabriela, progressive NGO and individuals declare, that the basic services of MECO is only a mere propaganda, lip service  and dead. Filipino migrant workers had nothing to expect from MECO.  From legal matters, for according to Carlo Aquino, the policy of MECO is to exhaust all option in dealing with cases to have free services from Legal Aide Foundation, NGO and charity institution. This is whether you're a legal or illegal worker. So as to undocumented Filipino migrant workers, for  as of Carlo said to us, MECO has no budget to those who are illegal (undocumented).

It also violates the right of the family to claim the body of their loved one and have her buried in her own country.

Or a policy from the board of trustees, from ambassador Basilio or is this policy only comes from the head of the department,  Assistance to National chief atty. Carlo Aquino?

Meanwhile, Atty. Art Abiera of MECO Manila said to Cynthia Deduro of Gabriela Ilo-ilo to halt the documents of Charymar Sables for the government of Taiwan cannot wait for her,  that is why they buried already the body of Marilou. This was been advice dated April 21, 2010.

It is a very big lie from the very big official of this rotten, corrupt and inhuman office whom supposedly represent the welfare of Filipino migrants and immigrants here in Taiwan.

Why lie? Because the daughter of marilou process the document these month only and Carlo Aquino commit to shoulder all expenses that was during our dialogue dated April 08, 2010. So as the expenses of Cynthia Deduro, according to atty. Art Abiera dated April 19,2010, that the board approved the said matter.

We demand to the ambassador, board and malacanang to immediately recall Carlo Aquino!

If you have a DELICADEZA, mr. Carlo Aquino sir, RESIGN NOW!

We are calling the senate to immediately investigate the plight of Marilou Sables!

It is only through this means can we hope that there would be changes for the better in our conditions as overseas Filipinos and for the rest of the Filipino people.

Email ThisBlogThis!Share to TwitterShare to FacebookShare to Pinterest
Posted by Unknown at 5:22 PM