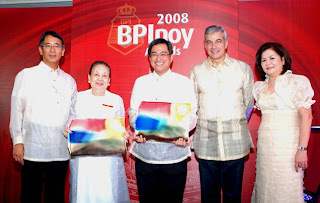 Now on its third year, the BPInoy Awards is an annual initiative that aims to encourage nationalism among Filipinos abroad and to communicate BPI’s commitment to excellence in the service of overseas Filipinos.

“Josie strongly believes that to be Pinoy is to Be Sipag (Hard-working), to Be Tipid (Thrifty) and to Be Mapagmahal (Loving),” said Natori’s mother Angelita Cruz who received the award on Natori’s behalf, “She is deeply committed to these values and the guidance they have offered and continue to offer in her life.”

“Receiving the BPInoy Award is a particularly significant recognition for me because I feel that my life’s work has been acknowledged and my passion, validated,” said Hizon, “I am incredibly blessed that my work allows me to do what I love and I am very grateful to BPI for appreciating what I have accomplished.”

Natori and Hizon were selected as this year’s BPInoy awardees for their excellence in their chosen careers and outstanding citizenship.

Former investment banker Natori celebrated her 30th year in 2007 as the CEO and founder of her million-dollar fashion empire based in New York.

Natori’s name, which happens to be the Japanese word for “highest form of art”, is now a luxury brand covering lingerie and other women’s fashions, children’s wear, and home furnishings.

Natori has been presented the Lakandula Award by President Gloria Macapagal-Arroyo in 2007 and the Galleon Award by Corazon Aquino in 1998. On Natori’s initiative, a factory in the Philippines was set up to handle 50% of her company’s production.

Natori also serves actively on the boards of the Asian Cultural Council, the Orchestra of St. Luke’s, the Statue of Liberty—Ellis Island Foundation, the Philippine American Foundation and Women In Need Organization.

Hizon’s other advocacies include the promotion of Filipino artists in Singapore in tandem with his wife Melannie Syquia and the feel-good Filipino news website GoodNewsPilipinas.com.

“BPI is privileged to share and celebrate the success achieved by Overseas Filipinos who have truly demonstrated inherent Pinoy values,” said Montinola, “the same values that catapulted them to world renown bringing honor and recognition to our country.”
BPI offers the BPInoy Awards amid its own achievements in the remittance industry as the Top Commercial Bank for Overseas Filipino Remittances for the 3rd straight year and a Bangko Sentral ng Pilipinas’ Hall of Fame Award for the same category.
Previous awardees include the world-renowned musical theater artist Lea Salonga, US-based technology entrepreneur Diosdado “Dado” Banatao, internationally-known fashion designer Monique Lhuillier, and famous heart surgeon Dr. George Garcia of Asian Hospital & Medical Center.

Labels: BPI, press release
Email ThisBlogThis!Share to TwitterShare to FacebookShare to Pinterest
Posted by Unknown at 11:41 AM