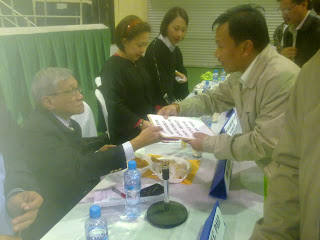 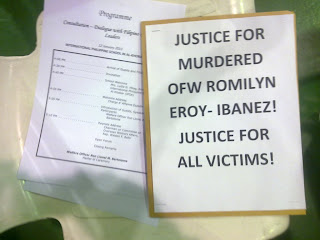 A chapter of Migrante-Middle East in , today urges the Congressional committee on Overseas Workers Affairs (COWA) chaired by Representative Walden Bello to conduct an investigation in aid of legislation on the unsolved cases of murdered OFWs in and in other parts of the .

On January 12, the members of the COWA headed by Rep. Bellow held a marathon dialogue, before flying back to Manila, with OFWs leaders and the Filipino community at the International Philippine School in Al-Khobar as part of their itinerary to presumably get first hand information on the worsening condition of OFWs amid numerous complaints of abuses and maltreatment.

More than a hundred OFWs have attended the said consultation; many of them are victims of abuse, maltreated, run away and undocumented.

“We thought that the members of the COWA headed by its chair Rep. Bello would not only hear the numerous woes of OFWs but will himself take the initiative to investigate the case of murdered OFW Romilyn Eroy-Ibanez and other victims of abuse,” said Gerry De Guzman, Migrante-Saudi Arabia Vice-Chairperson for the Eastern region.

“Well, like the November 2009 Congressional visit, this recent visit is not worth spending government budget from tax payers’ money, as we doubt if the COWA could convince P-Noy and the concerned government agencies to ink a bilateral agreement with the host government providing protection to our OFWs here in Saudi Arabia and neighboring Arab states,” De Guzman averred.

De Guzman said his group presented to Rep. Bello a copy of the signature campaign initiated by Migrante chapters in demanding government’s action and intervention on the numbers of unsolved cases involving mysterious deaths and sexual abuse.

The petition highlights, among other OFWs mysterious deaths documented by Migrante on previous years,  the case of Al-Khobar based 22 year-old Romilyn Eroy-Ibanez who was found soaked with blood, was rushed to the hospital in critical condition, then hours later was declared dead by attending doctors of the hospital.

As of yesterday, there are about 236 have signed in the petition online while there are 22 OFWs organizations supporting the petition aside from the 300+ actual signatures gathered by Migrante chapters , and still counting.

On his part, Abdulrahman Parcarey, lead convenor of the Al-Khobar based Muslim-Christian Alliance for Justice and Peace in the Philippines (MCA-JPP) said he is hoping that what the COWA congressmen have promised during the consultation to convey to President Aquino the issues and concerns of OFWs would be acted upon with sincerity and genuine service.

“Rep. Bello explained more about the programs of the Aquino government, but here in Saudi Arabia we didn’t feel or see any government action and program protecting our OFWs from abuse, maltreatment and labor malpractices by erring employers,” the Muslim leader added.

Even without invitation, Migrante officers and members were able to attend on the series of COWA consultations in , Jeddah, and .

The COWA congressmen have also conducted consultations with OFWs in and Jeddah on the 9th and 11th January, respectively. They ended their 5-day Saudi visit and flew back to on January 12.

Email ThisBlogThis!Share to TwitterShare to FacebookShare to Pinterest
Posted by Unknown at 11:56 PM