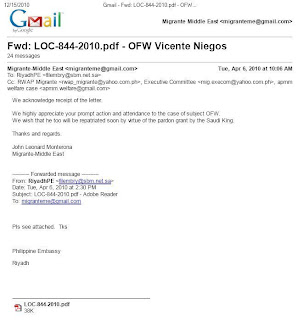 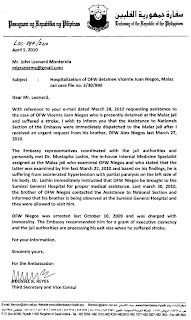 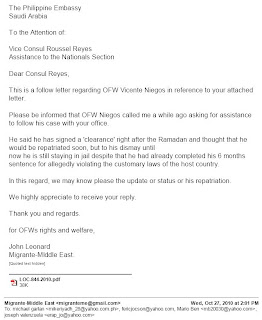 Repeatedly making discrete calls from prison cell, a sick OFW pleads again for his deportation, today said a Filipino migrant rights group providing assistance to distress, run away, and jailed OFWs in and in other Mid-east countries.

“He’s begging for his immediate deportation since he said he had already completed serving his time in jail and was among those who have been granted an executive clemency last December 2009 by the Saudi King,” said Monterona.

OFW Niegos was arrested last October 10, 2009 and was charged with ‘immorality’.

He already served his jail term of 8 months plus 70 lashes. He is still detained in ’s Malaz Central jail for 14 months now.

Monterona said he could recall well that he had formally endorsed OFW Niegos case to the Philippine Embassy-Assistance to the Nationals section (ANS) for assistance as he had suffered a stroke and had requested to attend on his case sometime on April this year.

On April 5, the PHL embassy-ANS replied to Migrante-ME confirming that he had suffered a stroke and was attended by an embassy staff with the jail’s in-house doctor who found out, after examinations that OFW Niegos is suffering from accelerated hypertension with partial paralysis on the left side of his body. On the same day, he was brought to the for proper medical assistance.

On the same letter (see attached), the PHL embassy confirmed that OFW Niegos exit clearance is under process by jail authorities.

“On October 27, OFW Niegos called me to follow his case and deportation, saying he’s not getting better from stroke he suffered resulting to partial paralysis of his left-side body,” Monterona added.

On the same day, Monterona said he sent a follow up letter to the PHL embassy asking for update and status of OFW Niegos release and deportation. “He (OFW Niegos) said he had signed a clearance right after Ramadan and though that he would be repatriated soon, but to his dismay until now he is still staying in jail despite that he had already completed his sentence,” Monterona on his October 27 follow-up letter sent to the PHL embassy.

“I was surprised to receive a call from OFW Niegos yesterday, still from prison; I thought he had been released and deported. He is crying and begging for his immediate deportation,” Monterona averred.

Yesterday, Monterona added he had sent again a follow-up letter to the PHL embassy to inquire the status of OFW Niegos release and deportation. “The embassy acknowledged my email and said OFW Niegos has already issued an exit clearance but they are still awaiting his air ticket after the PHL embassy sent a request to the DFA-OUMWA main office in .

“Again and again, we are calling the DFA-OUMWA officials to promptly attend on OFW Niegos case by releasing the air fare ticket request which is about 1,800 Saudi riyals (P20,700) amid the 62-M assistance funds, from the combined balances for 2009 and 2010, in the DFA,” Monteorna averred.

“There are other OFWs in similar situation who have already completed jail term and awaiting their deportation; they longed to be home and start a brand new life with their families in the ,” Monterona added.

Monterona said there are about 200 jailed OFWs in Malaz Central jail awaiting assistance and update of their respective cases from the embassy. # # #

Email ThisBlogThis!Share to TwitterShare to FacebookShare to Pinterest
Posted by Unknown at 1:34 PM