Justice to Mining Disaster Victims in the Philippines 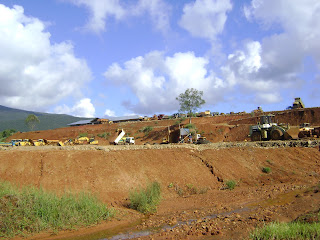 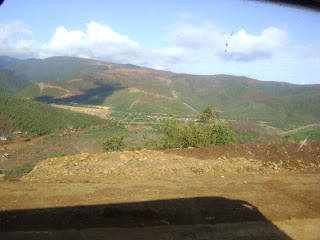 March 24, 1996, Exactly 14 years ago, the worst mining disaster happened in Marinduque Island, Philippines put the country in the global map. The mine tailing collapse occurred a year after the passage of the Philippine Mining Act or R.A. 7942. The disaster resulted in the release of over 1.6 million cubic meters of tailings along 27 km of the river and the coastal areas. The impact on the river and the people who depend on it for their livelihoods was massive. The rush of tailings displaced river water which inundated low-lying areas, destroying crops and vegetable gardens and clogging irrigation channels to rice fields. The release left the Boac River virtually dead.

The Marcopper Mining Corporation Officially started its mining operations on Marinduque Island, in 1969 at what was known as the Mt. Tapian ore deposit. This was after a number of years of mining exploration and studies. When the Mt. Tapian reserve was depleted in 1990, Marcopper continued its operations utilizing the San Antonio copper orebody which lies some 3 kilometers north of the Mt. Tapian mining complex. Mine tailings from the Mt. Tapian ore deposit were discharged into Calancan Bay. It is estimated that a total of no less than 84 million metric tons of mine tailings were discharged into this shallow bay between 1975 and 1988. Due to constant complaints by local residents against the continued dumping of mine tailings into Calancan Bay, it was agreed that the old Mt. Tapian open-cut mine site would be used to receive mine tailings from the San Antonio operations on a temporary basis. In spite of the unconventional use of the Tapian Pit as a containment system, no environmental risk assessment and management was carried out by Marcopper.

The incident involved the Marcopper which has been carrying out open-pit copper mining since the 1970s. When the company finished one of its operations in Marinduque, it plugged up the old pit with a concrete fixture to allow the pit to act as a disposal lake for mining waste. In August 1995, a significant leak was discovered in the pit's drainage tunnel. This subsequently fractured. The accident discharged tailings into the Makulapnit-Boac (Boac) river system. The effects of the incident were so devastating that a UN assessment mission declared the accident to be a major environmental disaster. The Tapian pit contained around 23 million metric tons of mine waste. Officials of the DENR (Department of Environment and Natural Resources) claim that they did not know of the presence of the drainage tunnel measuring 2.6 kilometers long and 1 meter wide which was found underneath, which leads to the Makulapnit and Boac river system.

The toxic spills immediately caused flash floods which isolated five villages, with a population of 4,400 people, along the far side of the Boac river. One village, Barangay Hinapulan, was buried under six feet of muddy floodwater and 400 families had to flee to higher grounds. Their sources of drinking water were contaminated while fish, freshwater shrimp and pigs were killed. Helicopters had to fly in food, water and medical supplies to the isolated villages. Residents of 20 villages out of the 60 villages in the whole province were advised to evacuate their communities.

The government estimates that this toxic tailings waste killed P1.8 million worth of mature freshwater and marine life and P5 million bangus fry. The 27-kilometre Boac river, which is the main source of livelihood for those who are not part of the 1,000-strong workforce of Marcopper, has been declared dead by government officials.

On 17 April 1996, the Department of Health (DOH) came up with a report which said that residents could already be harbouring in their bodies amounts of zinc and copper which are beyond tolerable limits. Despite these findings, Marcopper held on to the claim that the tailings were non-toxic.

The drinking water residents relied on was contaminated. Fish, shrimp and other food sources, which are the main livelihood for those who do not work for Marcopper, were immediately killed. After the disaster, Marcopper and Placer Dome closed down all their mines. The government attempted to cover up the fact they did not enforce environmental laws throughout the years. The local residents in Marinduque have also claimed they knew about the tunnel for almost 20 years. Evidence came to light that Marcopper knew of the leak in the drainage tunnel well in advance of the accident, as there had been a long history of On October 4, 2005, the provincial government of Marinduque sued Marcopper's parent company, Placer Dome, for $100 million in damages. Placer Dome was purchased in 2006 by Barrick Gold, who has now been joined in the lawsuit.

Marcopper and Placerdome left tons of hazardous wastes together with the unpaid millions of pesos of taxes due to the local government.  They left an impoverished economy and a devastated environment that the people are now trying to rehabilitate by themselves.  They find the present policy of the national government of aggressively promoting mining throughout the country a great insult, as if what happened to the island province of Marinduque was not enough.  Marinduque Island remains one of the poorest provinces in the Philippines.

The impact brought by mining in the lives of the people is not an isolated case for Marinduque, the growing resistance of the community all over the Philippines calling for the scrapping of the Philippine Mining Act or R.A. 7942. Mining Act is a national policy of attracting extractive industries such as mining at the expense of the environment, people's rights and welfare and national patrimony.

The LRC-KsK, the Alternative Law Groups (ALG) and Alyansa Tigil Mina (ATM) are filing cases of mining affected communities in the Philippines on March 24 to give justice to the people devastated their lives by Mining.

Email ThisBlogThis!Share to TwitterShare to FacebookShare to Pinterest
Posted by Unknown at 1:56 PM