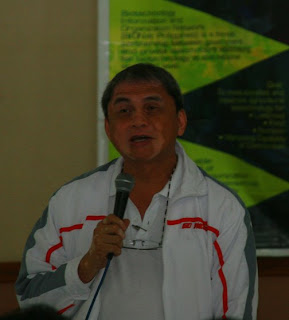 Pampanga Governor Ed Panlilio says biotechnology can help the country generate more jobs and consequently reduce substantially the exodus of Filipinos seeking jobs overseas.
Panlilio also credited the Department of Agriculture-Biotechnology Program Office and director Alicia Ilaga for promoting the use of biotechnology to develop more products from the lowly malunggay.
Malunggay seeds are a good source of biofuel while its fruits and leaves possess substantial amounts of vitamin A, iron, calcium, potassium and other micronutrients.
Its roots are a good source of anti-cancer agents while its trunk may be harnessed for the production of ethanol from cellulose.
Panlilio said that biotechnology is a "means of expression and improvement" to uplift our economy and resolve problems in migration and political bickerings.
The governor made the statement during a recent Seminar-Workshop on Economic Opportunities for Pampanga.
"We could develop biotechnology, like (its use on) malunggay. The Philippines is very rich in terms of resources, if we could only improve our natural and human resources, the Filipino will stay and not migrate," he stressed.
Panlilio said Pampanga is open to biotechnology and supports its use in agriculture, as long as it is safe and benefits the populace.
Pampanga was among the first to plant Bacillus thuringiensis corn and a farmer there who planted Bt corn on 1.3 hectares of land harvested 13 metric tons of the crop. Panlilio declared that Pampanga is open to biotechnology.
A priest of the Catholic Church, which has its reservations regarding the use of genetically modified organisms, he expressed his views regarding the use of GMOs.
"I am not an agriculturist, but is the use of GMO harmful or benficial?" he said.
"When it is beneficial, like this moringa, which is a good and affordable source of nutrients and already has a market for its products, we promote this kind of practice for our people," the governor continued.
Panlillio's constituents agree with him. They want the malunggay industry to thrive in Pampanga.
Provincial agriculturist Dr. Mario Mangiliman reiterated the governor's statement that Pampanga is open to the use of biotechnology and the province's Farm and Resource Management Department is now focusing on malunggay cultivation.
Mangiliman emphasized that they are pushing for malunggay planting to fight malnutrition.
He praised the governor for the support he has given to the Pampanga's agriculture and his efforts to help the province's farming sector through biotechnology.
Mangiliman added the provincial government has allotted P74 million to purchase a shredder for the farmers to be able to manufacture their own bioorganic fertilizers.
Many fear that Pampanga's industrialization might result to the sacrifice of agricultural lands. Panlilio pointed out that the provincial government implements a policy that limits the size of land that can be used for industrialization for the land area for planting not to be diminished.
"We cannot treat agriculture with no importance because without agriculture, industrialization cannot be a possibility. We should maintain it. We at the provincial government support the initiatives of the agriculture department," the governor concluded.
biolife news service
Labels: agriculture, press release
Email ThisBlogThis!Share to TwitterShare to FacebookShare to Pinterest
Posted by Unknown at 1:41 PM