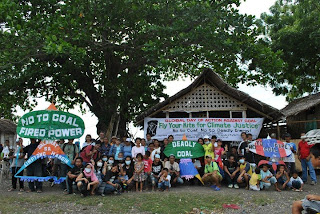 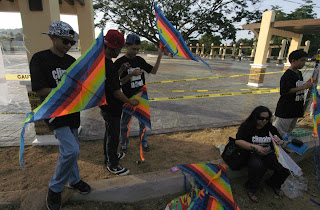 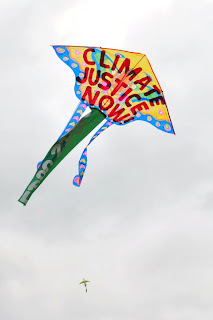 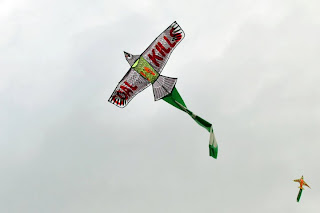 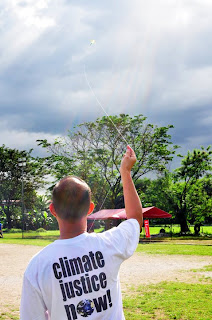 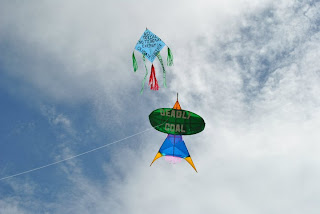 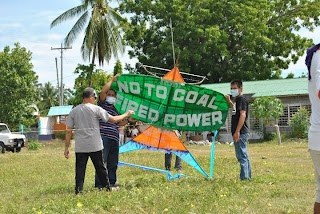 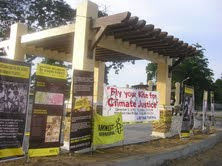 – Green groups with their families had fun flying kites while bringing their message across – no to deadly energy and ban coal.

“It’s a family day and we want to enjoy it in this open field while participating in a global day of action against coal and 12 days of action for climate justice” said Judy Pasimio of the (LRC-KsK-FoE Phils).

The “Kite Flying for Climate Justice” at UP Academic Oval on Sunday (December 5, 2010) was attended by members of various groups including the Philippine Movement for Climate Justice, Focus on the Global South, Friends of the Earth International (FoEI), Miriam Environmental Planning Organization,

Kites across the nation

Sr. Susan Bolanio, SCAN spokesperson said that studies have already proved that coal is the dirtiest and dangerous source of energy.  “Coal is the leading source of global warming and pollution” she said adding that the purported power shortage will be caused by the huge demand of mining industry.  While it may be true that the Socsksargen region would need additional power, we believe that SMI-Xtrata’s Tampakan project will be requiring more than the actual energy needs of the people in the region.  That explains the plan to establish at least two coal-fired power plants here,” she added.

Said power plant will consume hundreds of tons of coal daily, which will be sourced out in the coal rich , .

“We went to and witnessed the destructive impacts of coal mining.  We don’t want the same to happen to us in .  Our lands and produce will be taken away from us for the benefit of the few,” said Yellen Zata, chairperson of Hublag Kontra Mina (HUKOM). HUKOM and the Taboli-Manobo S’daf Claimants Organization (TAMASCO) are leading the resistance against coal mining projects in Barangay Ned, .

“There might come a time that our skies are so dark, dirty and deadly enough due to coal burning that even kite flying is no longer enjoyable. I want my children and the future generations to enjoy our relatively clean air right now and we echo the same call – stop burning coal” said Ma. Zherwinah Mosqueda of LRC-KsK/FoE Phils. Cagayan de Oro.

Fr. Romeo Catedral, Social Action Director, disclosed that the Diocese of Marbel will also hold a  Kalembang sa mga Kampana event to express the church’s solidarity with coal-affected communities in the region and across the world.

“Around 25 parishes will hold solidarity masses and at exactly 12 noon on December 5 and church bells will be ringing through-out and Sarangani.   We want this administration to know that we are extremely disappointed over its decision to continue with the plan to increase the number of coal-fired power plants in the country,” he said.

In , the United Church of Christ in the Philippines (UCCP) – Western Mindanao Conference also supported the calls of “No to coal! No to dirty technology!”.

In a sermon delivered by Rev. Diosdado Marquez, UCCP Conference Minister and Chair of the FDC in Western Mindanao Region (FDC-WMR), “Turning our coal reserves into projects for profits is a classic example of the commoditization of our natural resources. We must remember that God entrusted to us the environment to use it responsibly”.

Moro communities are also in support of the non-use of coal as energy source in coherence with the climate justice call. “Imams” or Islamic leaders delivered sermons in various mosques at 12:00 noon in and Zamboanga del Sur.

A global call for climate justice

The GLOBAL DAY OF ACTION AGAINST COAL is participated by indigenous peoples, communities, peoples’ organizations, support groups and non-government organizations from various parts of the globe to demand among others the immediate phase-out  and abandonment of coal as energy source.

This activity is part of the 12 day of action of the Philippine Movement for Climate justice (PMCJ), a series of coordinated actions in key cities and provinces nationwide dubbed “Depensahan, Taumbayan at Kalikasan”. These actions will run directly in parallel throughout the period of the United Nations Framework Convention on Climate Change’ sixteenth Conference of Parties (COP 16) in Cancun, Mexico from November 29 to December 10, 2010.###

Email ThisBlogThis!Share to TwitterShare to FacebookShare to Pinterest
Posted by Unknown at 1:13 PM