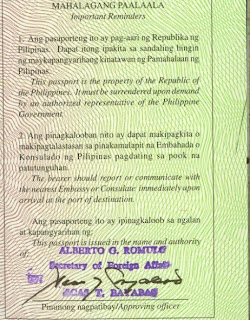 An alliance of overseas Filipino migrant rights group in the Middle East today urges the various RP posts in the to regain proprietorship of OFWs passport that were “surrendered” upon demand by their respective employers.

John Leonard Monterona, Migrante-Middle East regional coordinator said it became a normal practice by employers in Arab countries confiscating the passport of their hired OFWs upon arrival to job site.

He said various RP posts representing OFWs, should regain their passport that has been ‘confiscated’ by their employers.

Monterona cited that at the back of the old Philippine passport (the green one) it stated “This passport is the property of the Republic of the .”

“It is only in the that OFWs passports are confiscated by employers,” Monterona averred.

“Confiscation of OFWs passport by their employer has a negative connotation and serious implication on the status of the hired worker albeit the inhumane treatment to OFWs by their employers,” he added.

In Arab countries, migrant workers have been hired under the ‘sponsorship’ system whereby the employer will provide a work permit for its workers as sponsor.

In and the , the work permit is called “Iqama”, while in it is known as “Pataka”.

Monterona said in Saudi Labor Law for instance, setting the general principles and rules of an employer-employee relations, does not even mention that the hired worker’s passport needs to be surrendered or must be confiscated by the employer. “There is no obligation imposed by the host government labor law to surrender the passport of hired OFW,” he continued.

“In our initial study and research, there is no legal requirement imposed by the host-receiving governments in the to confiscate or surrender OFWs passport to their employer,” Monterona added.

Monterona cited that in the UAE for instance, its government has implemented a rule that migrant workers passport must not be confiscated from them by employer. However, still there are companies that are confiscating their hired workers passport.

“OFWs are paying costly passport only to be confiscated by their employer upon arrival to their respective job site,” Monterona added.

Monterona said this is OFWs rights issue but has been there for so long that even various RP posts didn’t mind at all. “What RP consular and labor officials doing about it?” he queried. (end) # # #

Email ThisBlogThis!Share to TwitterShare to FacebookShare to Pinterest
Posted by Unknown at 12:09 AM